At first glance, Barry Le Va’s sculptural installations—consisting of waves of blown-out chalk, discordant piles of strewn felt and scattered ball bearings, or sheets of broken glass—appear chaotic in form. As the artist explained, these dispersions are the “residue of an activity, a result of cause and effect, and the handling of tangible materials.” They are remnants of the kind of sculptural acts that define Postminimalism such as cutting, throwing, and dropping, and are distributed over large areas, compelling the viewer to physically move throughout the gallery. Despite their visual disorder, Le Va’s installations are actually meticulously mapped on paper prior to their placement on the ground. The artist studied architecture before he turned his attention to the visual arts, and the question of how space is organized and produced informs nearly every aspect of his work.

In 1968 Le Va began using powdered materials to interrupt and divide the gallery floor. Two Becoming One: Here to There; Here from There (1968–69/2019) combines elements of two of the artist’s earliest works in this vein: Omitted Section of a Section Omitted (1968–69) and 6 Blown Lines (Accumulation Drift) (1969). Chalk-line undulations—produced using an air compressor—cascade into a sweeping geometric expanse of the loose material. Within this field, a rectangular section of negative space corresponds to the width of the adjacent passageway in the gallery (an omission in chalk of a section of omitted architecture). As Le Va explained, “Basically all the pieces made with fine dust became barriers. They had a kind of ambivalence about them: they seemed to invite you to walk across them, because they were spread over an area where you normally walk, yet at the same time, they denied you that right because they were so fragile, they would disintegrate the moment you stepped on them.” At Dia Two Becoming One occupies an entire gallery, articulating its architectural limits while denying the viewer physical access to the space.

Le Va considered each of his sculptural installations open-ended works, which, like musical scores, can be reconfigured and replayed. Using his diagrammatic drawings as a guide, the artist improvised as he executed each new presentation. To this end, the three felt-based installations on view here—Animations: Frame by Frame (1967/2019), Placed Parallel (1967/2019), and Untitled #10 (1968/2019)—were each modified (expanded here, contracted there, and occasionally rearranged) in response to the scale of Dia’s architecture and their placement within it. Further, while carefully plotted in advance, these sculptures were executed quickly and embrace chance. The rumpled stacks and littered felt clippings, along with the tossed ball bearings, evince the artist’s rapid movement. Like Le Va’s scattered felt-based works, the Layered Pattern Acts (conceived between 1968 and 1971) are meticulously diagrammed in advance and then realized spontaneously on-site. In each, sheets of glass are geometrically stacked to accentuate the relationship between the corners and edges of these planes. The stacks are then smashed with a hammer, creating shards that expand outward and endure as evidence of a destructive action. These arrangements juxtapose hardness and softness, fixity and motion, spilling out of view in a vast horizontal sprawl.

In Cleaved Corners (1969/2019), seventeen cleavers have been frenetically hacked into three corners of a gallery. As with Le Va’s dispersals, the placement of cleavers suggests the reach of the artist’s own body, inviting the viewer to imagine the process by which they became lodged into the wall. Together they suggest a choreography of movement, method, and angle of attack. This implicit violence is not accidental. The artist’s work, while not overtly political, often considered violence and destruction in formal terms by highlighting gesture, location, material, and structure. Combining a rigorous approach to material and form with a sense of mischievous danger, Le Va left a series of spatialized clues to this process—from strewn scraps of felt to neatly organized metal rods—within the gallery for each viewer to uniquely piece together through their own embodied perceptual encounter. 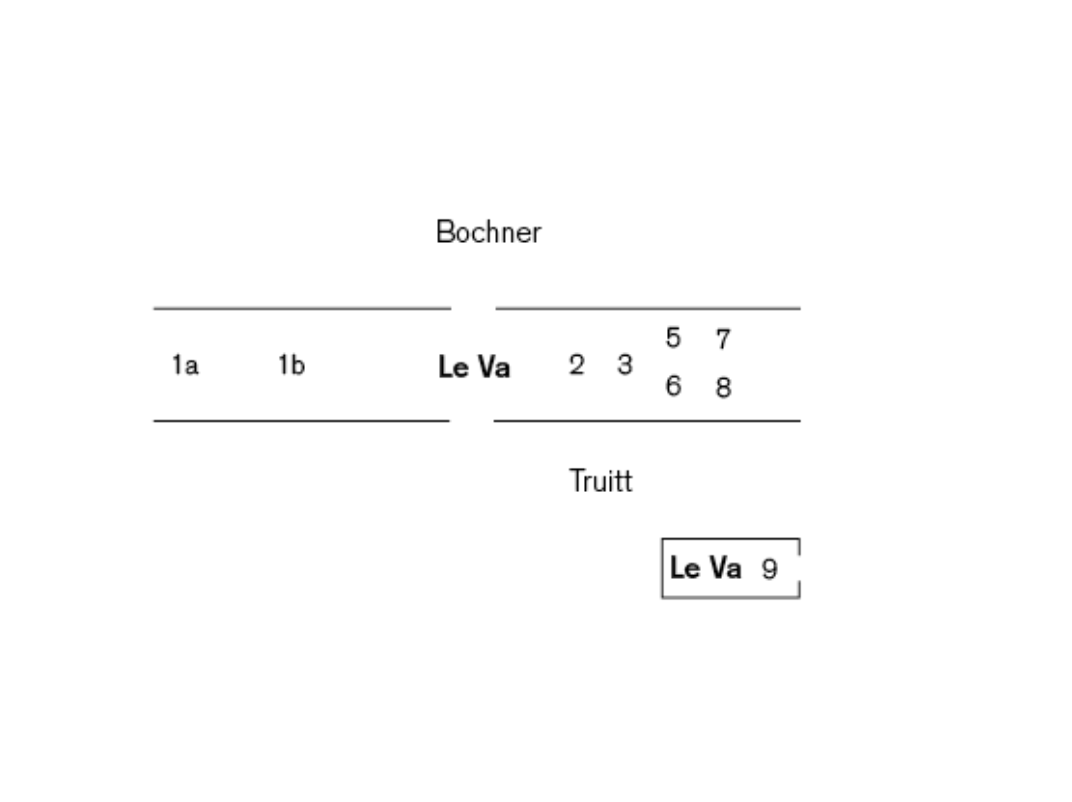 Barry Le Va was born in Long Beach, California, in 1941. He studied at California State University, Long Beach, from 1960 to 1963, and later received a BA and an MFA from Otis Art Institute, Los Angeles, in 1964 and 1967, respectively. He started teaching art in the late 1960s and worked as an instructor at Minneapolis College of Art and Design, Princeton University, and Yale University, New Haven, Connecticut. Following his first solo exhibition in 1969 at the Walker Art Center, Minneapolis, his work was included in landmark presentations including Anti-Illusion: Procedures/Materials in 1969 at the Whitney Museum of American Art and Information in 1970 at the Museum of Modern Art, both in New York City. Le Va also participated in Documenta (1972, 1977, and 1982) and the Whitney Annual and Biennial exhibitions (1971, 1977, and 1995). Major surveys of his work have taken place at, among others, the New Museum, New York (1979); Institute of Contemporary Art, Philadelphia (2005); and Serralves Museum, Porto, Portugal (2006). In recent years Le Va’s work has been included in exhibitions at MoMA PS1, New York (2015–16); Yale University School of Art (2015); Dallas Museum of Art (2015); and David Nolan Gallery, New York (2018). He died in New York City in 2021.