Charles Gaines has been interrogating the way meaning is constructed through lyrical, system-based works since the 1970s, when he began incorporating the grid as a central formal device in his work. A key figure in the development of Conceptual art, Gaines analyzes, overlaps, and juxtaposes different systems of representation—mathematical, photographic, linguistic, notational—in order to reveal individual fallacies and collective poignancy. Following Dia’s recent acquisition of a body of work by Gaines, this focused, collection-based survey brings together the artist’s first mathematically determined grid drawings and early experiments with transcribing photographic images into numerical notations, alongside more recent investigations into how image, identity, and language are represented and deconstructed.

Charles Gaines has been interrogating the way meaning is constructed through lyrical, system-based works since the 1970s. A key figure in the development of Conceptual art, he analyzes, overlaps, and juxtaposes different structures of representation—mathematical, photographic, linguistic, notational—in order to reveal moments of individual fallacy and collective poignancy. In addition to the concept behind the work, the deliberate process and accidents of its making are crucial to the final output. As Gaines explains, this convergence of the systematic and aleatory (or random) complicates the allegedly indexical relationship between symbol and meaning, which in turn opens up new and unexpected space for seeing both “coterminously.”1 This focused, collection-based survey brings together the artist’s first mathematically determined drawings and early experiments with transcribing photographs into numerical notations, alongside more recent investigations into how image, identity, and language are represented and deconstructed.

In the early 1970s Gaines turned to the grid—an important formal device in both modern and Minimal art—as a rational visual structure through which to explore how information is organized and relayed. This move was motivated, in part, by his readings of art historian Henri Focillon and theorist Ajit Mookerjee on the individual agency of matter and by his first encounters with the repetitive sequencing and use of predetermined rules in work by Hanne Darboven and Sol LeWitt (who would later become a close friend). Gaines began deploying serial calculations and systematic procedures to produce numerical groupings, which he then plotted into gridded drawings. The results at once resist his own subjective expression and cultivate visual and conceptual ambiguity. As the artist explains, “I looked for tropes, like mathematics, that do not privilege the creative unconscious. . . . Through ‘systems’ I could go where the imagination couldn’t and bring things that otherwise would not be thought about to light. Out of this I began using the grid.”2

The Regression series (1972–74), Gaines’s first grid works, consists of four groups of seven drawings all determined by a mathematical formula the artist derived. The numbers in the first drawing of each set are manipulated to produce those on the following drawing and so on in linear sequence. To curb the potentially infinite proliferation of numbers, Gaines devised what he calls a “radical divider” that he applies to the last drawing of each set. The resulting numbers provide the basis for the first image of the next set. Therefore each set is at once a linear progression and a regression. A flowing computational system of numbers generates the works and produces forms that sequentially expand and contract in waves. Abstraction and order converge in these drawings, prefiguring the artist’s later interests in speech and sound.

In the mid-1970s, Gaines began to incorporate photographic images into his practice. For his series Walnut Tree Orchard (1975–2014) and Faces (1978–79), among others, he made photographs of plants and people and transcribed them into numbers and colors, which he then transposed onto grids. The final rendering of each set combines the other numerical images in its corresponding series (trees or faces) into a palimpsestic composite. The artist wrote to LeWitt in 1989 that he employs color in these works “not as affective gesture, but as code to establish difference.”3 Gaines has always approached his rigorously formal practice through the lens of cultural criticism. As he explains, “my interest in working with systems and processes was because I had existential questions that came out of my experience living in the Jim Crow South; questions like: who authorized this system?”4 Thus, while in the Faces series color is used to distinguish between layers of portraiture, it also implicitly raises questions of racialization.

Gaines’s work of the late 1970s and early 1980s extended his serial processes to movement and negative space. In his Shadows series (1978–80), the artist choreographed rotating views of houseplants and their shadows. For Africa and Numbers (1984), the artist recorded weather patterns across the African continent. In these works, what begins as indexical mapping crescendos into abstraction, a form that calls into question the technical precision and presumed objectivity of photographic or scientific documentation.

Since the early 2000s, Gaines’s practice has come to encompass sculpture, video, music, and performance. His recent work continues to probe the liminal space that emerges from the juxtaposition of different forms, particularly music and language. However, these works reveal an increased and explicit preoccupation with the complex relationship between aesthetics and social justice. Reprising his early interest in physiognomy, his series Faces 1: Identity Politics (2018) traces a discursive history of identification and selfhood in numerically rendered portraits. These feature influential thinkers on the subject ranging from Aristotle to Maria W. Stewart, Michel Foucault to Molefi Kete Asante. In the series Librettos: Manuel de Falla/Stokely Carmichael (2015), Gaines lays the text of Carmichael’s 1967 speech on the exploitation of African American workers beneath the score of de Falla’s tragic 1904 opera La vida breve, itself a tale of labor and class. This composite invites viewers to find their own parallels and contrasts between differing modes of address (speech and song, text and musical notation, historical and fictional).

Black Ghost Blues Redux (2008), a video work by Gaines in collaboration with Hoyun Son that features the latter artist singing Lightnin’ Hopkins’s 1963 song “Black Ghost Blues,” will be accessible on Dia’s website throughout the exhibition. 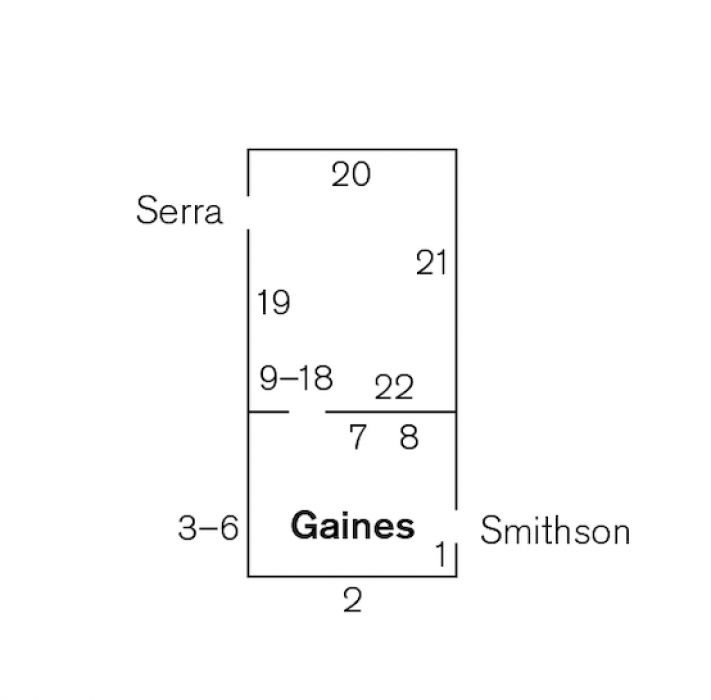 20. Africa and Numbers, 1984
Ink and watercolor on paperboard
Private collection

Born in 1944 in Charleston, South Carolina, and raised in Newark, Charles Gaines graduated with a degree in fine art from Jersey City State College in 1966. The following year, he received his MFA from Rochester Institute of Technology, New York, where he developed interests in alternative modes of image making, spanning Buddhist diagrams to John Cage–inspired chance operations. An influential pedagogical figure, Gaines has taught at CalArts, Santa Clarita, California, since 1989. Since the 1990s, his practice has extended into critical writing and curatorial projects. These include the exhibition Theater of Refusal: Black Art and Mainstream Criticism, organized by Gaines for the University of California, Irvine, in 1993, which examined the conditions that African American artists faced at the time.

Charles Gaines was born in Charleston, South Carolina, in 1944. He lives in Los Angeles.