Gerhard Richter realized Six Gray Mirrors as a site-specific work for Dia Beacon in 2003. Six gray-enameled glass panels hang from the walls on supports that allow them to be tilted at various angles. Their neutral depths not only reflect visitors but also respond to the light from the high windows, combining architecture, sculpture, and painting into a synthetic whole. The somber appearance of the work simultaneously negates and combines Richter’s passion for glass, mirror, and monochrome—three tenets in the tradition of painting that the artist engaged throughout his career.

Gerhard Richter exhibited his first signature works in a Düsseldorf furniture store in 1963, demonstrating an early fascination with the way that the context of painting operates—physically, socially, historically, and conceptually. Based on photographs from newspapers and other popular sources, and on family snapshots, these early works also explore how photography, modernity’s dominant visual language, impacts the production and reception of painting.

Two paradigms have informed representation in Western painting since the Renaissance. One derives from the understanding of a painting as a window opening onto the world; the other as a mirror reflecting whatever stands before it. These two tropes converge in the material of glass, agent of transparency and reflection. As the advent of photography brought representational painting to a moment of crisis, a new painterly paradigm emerged with the monochrome—a painting with no other qualities than its physical, colored surface, thus rejecting representation and expression. As this process became explicit in the second half of the twentieth century, the window, mirror, and monochrome aptly became subjects in some of Richter’s works. The Gray Paintings series, begun in 1967–68, confronts the monochrome as a dead end of modernist painting, superimposing a nondescript gray hue over a reflective surface. While invoking precedents by twentieth-century pioneers such as Aleksandr Rodchenko, Kazimir Malevich, Barnett Newman, and even Mark Rothko, these works ambiguously mourn lost registers of pictorial experience: mimetic representation (as “reflection”), subjective expression, virtuoso craftsmanship, and sensual gratification. Richter himself has bleakly described the series as “the welcome and only possible correlative for indifference, apathy . . . formlessness.”

Increasingly incorporating the spaces around his art into the work itself, in 1981 Richter produced the first of his mirror works, which, expelling all traces of their maker, instead absorb the world around them, in all its transitory serendipity. Subsuming spectators, the mirrors deprive them of any stable relationship to space. Meanwhile, Richter’s practice has progressively turned to a fusion of architecture, painting, sculpture, and decor. He once described a “dream of mine—that the pictures will become an environment, or become architecture—that would be even more effective.”

Richter’s installation at Dia:Beacon, Six Gray Mirrors (2003), fuses the Gray Paintings and the glass and mirror works. He describes it as a “Neither/Nor,” adding, “which is what I like about it.” At his request the space has been designed as a white-cube gallery lit by a clerestory. Here six gray-enameled glass panels are cantilevered from the walls on supports that allow them to be tilted at various angles. Their achromatic depths not only reflect visitors but respond to the light from the high windows, conflating architecture, sculpture, and painting into a synthetic whole.

“Glass symbol (to see everything to understand nothing),” Richter wrote in 1966, succinctly formulating his doubt about the connection between light, and glass as its agent, and the ideals of transparency and objectivity that informed the mission of the Enlightenment in Western modernity. The somber surfaces of Six Gray Mirrors obscure as they reflect, offering no reconciliation between refraction, representation, and abstraction. These paintings convey a form of doubt, a triple negation—of glass, mirror, and monochrome—while simultaneously merging those three forms. 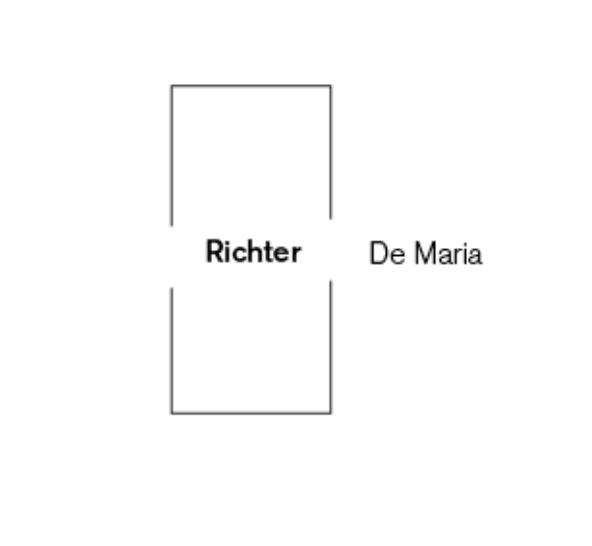 Gerhard Richter was born in Dresden in 1932. He studied at the Dresden Academy of Fine Arts between 1952 and 1960 and at the Kunstakademie Düsseldorf from 1961 to 1963, becoming a professor there in 1971. Since his first solo show at Galerie Alfred Schmela in Düsseldorf in 1964, Richter has exhibited in many international venues, including Documentas 5 (1972), 7 (1982), 8 (1987), 9 (1992), and 10 (1997) in Kassel, Germany. In 1998, the Art Gallery of Ontario and the Museum of Contemporary Art, Chicago,
co-organized Richter’s first North American retrospective. In 1995–96, Dia Center for the Arts, New York, exhibited Atlas, Richter’s ongoing encyclopedic work composed of photographs, reproductions, and illustrations; in 2002–3,  Richter presented, with Jorge Pardo, Refraction, an exhibition in Project, Pardo’s redesign of Dia’s bookshop, lobby, and exhibition gallery. In 2011 a major retrospective opened at Tate Modern, London, before touring to the Neue Nationalgalerie, Berlin, and the Centre Pompidou, Paris.

Gerhard Richter was born in Dresden, Germany, in 1932. He lives and works in Cologne, Germany.