Since 1962 Marian Zazeela has worked with early Minimalist composer, artist, and her long-time collaborator, La Monte Young, on installations in sound and light. Though Zazeela’s sculptures and light design have become well known, her works on paper have remained decidedly less so. Dia presents twenty-nine works on paper dating from 1962 to 1990 (with the majority from the 1960s and 1970s), which showcase the range of materials and motifs that stem from the artist’s deep interest in calligraphy and ornamental forms. These works on paper advance what Zazeela has termed “borderline art”—challenging the distinction between decorative and fine art by using decorative elements in the fine art tradition, and using actual borders as content in themselves. Also on view are several drawings for concert flyers and posters, as well as album covers.

Marian Zazeela is made possible by generous support from Karyn Kohl.

Since the 1960s, Marian Zazeela has approached color and ornamentation as subjects in their own right, and structured her drawings according to the laws of symmetry. She expanded upon these principles as her work moved into three dimensions. Zazeela has worked with her partner and long-time collaborator  La Monte Young on large-scale installations in sound and light since 1962. Their pioneering practice brings together visual and aural components into experience-based installations unfolding in extended duration. This presentation of her drawings at Dia:Beacon, Beacon, New York, highlights their particular significance to her larger oeuvre and expands a broader conversation with artists working contemporaneously to Zazeela.

On visits to Morocco in 1959, Zazeela was inspired by the Arabic calligraphy on marketplace signs. Through this early interest in complex scripts and a class in Chinese calligraphy, she began to borrow forms from cursive writing and vary them to create new patterns. The artist distinguishes between work that focuses on words and letters and that which abstracts and alludes to language. With this experimentation, she developed the glyph form that emerges repeatedly in her works on paper.

Zazeela’s calligraphy frequently adorned concert and recording announcements throughout her collaborative performance career with Young. In many cases, the signature of the artists is not merely additional to these compositions, but rather an integral part of its content. Zazeela represented her and Young’s merging artistic and personal identities through their initials, collapsing the boundaries between Y and Z characters in Line of YZ’s #2 (3/13/64) (1964).

Drawing over text (or, in her own words, “[obliterating] letters and words”) is also part of her artistic mode. For Index (1963), Zazeela took a sheet from her father’s medical textbook listing the symptoms of an undiscernible disease. The artist obscured each malady with dense glyphs so that only the words “index” and “over” remain visible.

Zazeela’s repeated curvilinear marks allude to organic forms like coral, fingerprints, and wood grain. These are interspersed with primary shapes, such as squares inscribed inside circles inside squares. This patterning advances what she has termed “borderline art”: work that challenges the hierarchical distinction between decorative and fine art by using actual borders as content and ornamentation in the fine art tradition.

The artist extends the use of these repeated organic forms into her work on Coloraid paper. Through these works—which often require careful scrutiny to discern the subtle graphite sheen against their intense hue and matte surface—the artist proposes that color is never incidental to a drawing, but very much one of its subjects. This chromatic emphasis is furthered in her collaborative sound and light environments with Young, such as their Dream House installations. Zazeela’s projections and sculptural light works imbue these environments with intensely saturated color.

The installation also features a twelve-part work from Zazeela’s Portraits series. This 1977 work refers to Dia Art Foundation’s cofounder, Helen Winkler Fosdick. This body of work, according to Zazeela, presents “proper names . . . drawn with their bilaterally symmetrical, retrograde, and mirror-inverted images so that the abstract form of the written word may be viewed independently from its more literal meaning.” Symmetry is a primary tenet of both the artist’s drawing practice and her larger sound and light environments. Allowing the visual contents of the work (in this case the letters making up that person’s name) to be contemplated apart from their meaning, Zazeela’s calligraphy serves as a stand in for the figure in a form of abstracted portraiture. 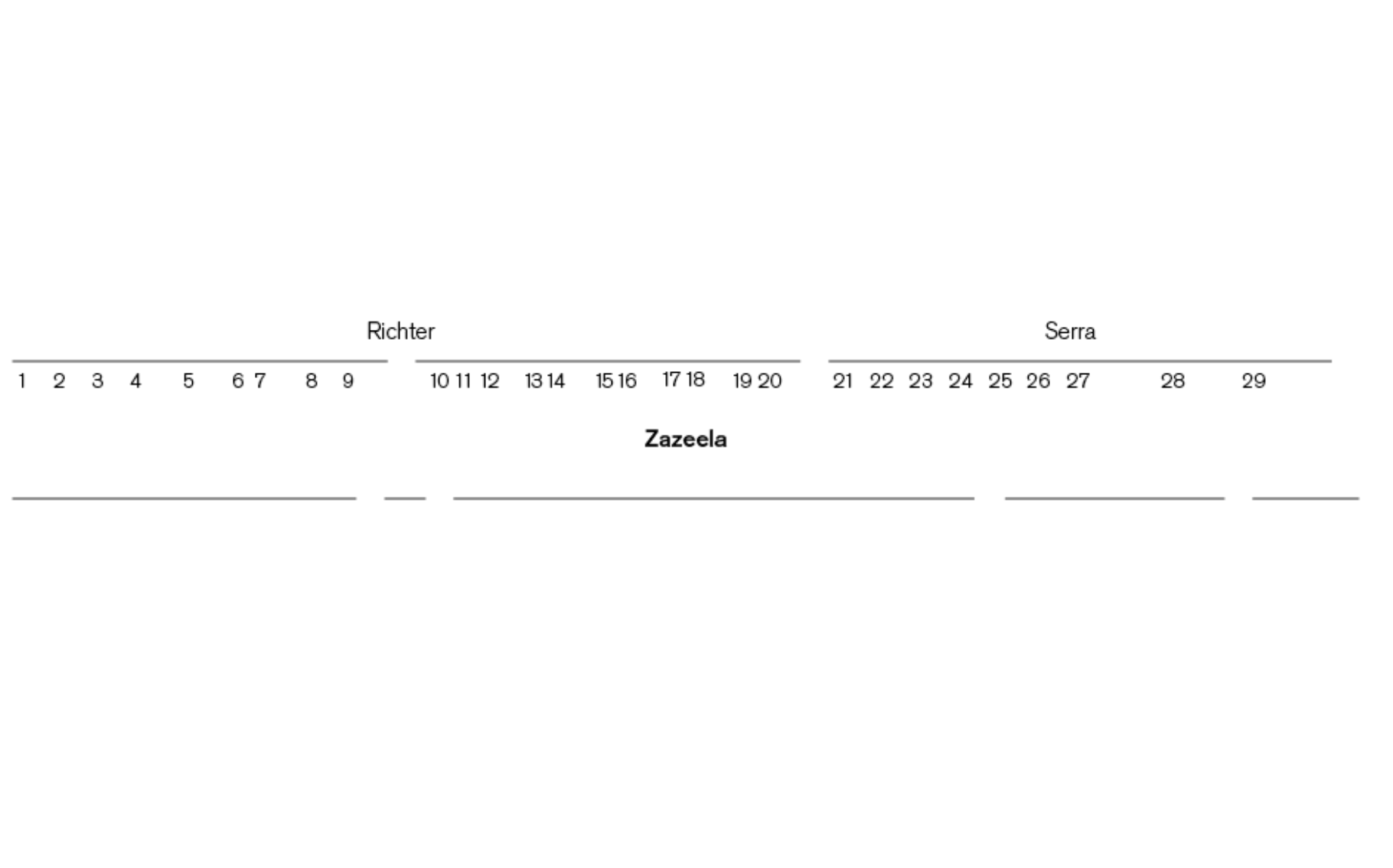 Marian Zazeela was born in New York City in 1940. She studied painting at Bennington College, Vermont, and has been working with light as a medium since the early 1960s. Her light installations and projection series have been exhibited widely throughout the United States and Europe. Since 1962 she has collaborated with her partner La Monte Young on Dream House installations and performances with the Theatre of Eternal Music. Like Young, Zazeela became a disciple of Pandit Pran Nath in 1970; the two artists have devoted the last several decades to the performance of Indian classical music as part of their Just Alap Raga Ensemble. Zazeela’s environmental and performance works have been credited with influencing Andy Warhol’s multimedia event series Exploding Plastic Inevitable, and have been the object of group and solo presentations at Dia Art Foundation, New York; Centre Pompidou, Paris; and the Kunst im Regenbogenstadl Dream House in Polling, Germany, where a retrospective of her drawings was organized in 2000.

Marian Zazeela was born in New York City in 1940, where she currently lives and works.