Though Michael Heizer began his career as a painter, he is best known for the monumental sculptural works he began making in the 1960s. Deeply concerned with archeology, ecology, and the natural landscape, he uses stone and steel as his primary materials. Often cutting into and expunging parts of the landscape, Heizer developed the concept of a “negative sculpture,” where the presence of the work of art is made palpable precisely through its material absence.

Heizer’s first negative sculpture, North, East, South, West (1967/2002) was conceived as a series of four geometric pits. The title’s use of the cardinal points is a reflection of the artist’s interest in the discrepancies between mapped and actual space. The work was conceived and partially executed in 1967 as North and South. Decades after these two components were dismantled, Dia commissioned Heizer to produce the complete series as a permanent installation for Dia Beacon. Installed in a neighboring gallery, Heizer’s Negative Megalith #5 (1998), a large stone entombed in a wall cutout, opens up similar questions. Though carefully contained, the towering work creates a sense of looming danger.

In the mid-1960s, Michael Heizer made a series of trips to his home states of Nevada and California to experiment in the American desert landscape. Originally a painter, Heizer had already made several works in which geometric shapes were carved out of canvases. Soon he set out to undertake the same operation in larger dimensions and in open space, free from the constraints of the stretcher and canvas, the exhibition, and, ultimately, the urban context. The first in his series of monumental Land art works, titled North, East, South, West, was to consist of four excavations in the Sierra Nevada Mountains in California, which echoed the shapes in his paintings. It was only partially completed in 1967, when North and South were produced in painted wood and metal, respectively, at 4 feet across and 4 feet deep.

Decades after the work was dismantled, Dia commissioned Heizer to produce a re-creation, this time indoors. The inauguration of this new, permanent version of North, East, South, West coincided with the opening of Dia:Beacon in 2003, where it has been constructed in its entirety, with the dimensions and material that Heizer originally specified for it. This work is a sequence of geometric pits: two stacked cubic forms, one larger and one smaller (North); a cone (South); a triangular trough (West); and an inverted truncated cone (East). Together they measure more than 125 feet in length and sink from the floor of the gallery to a depth of 20 feet. When the work was first developed, such dimensions had no precedent in the art of recent times.

The concept of negative space is critical for the understanding of Heizer’s work. Made literally of nothing, North, East, South, West presents the viewer with form as the separation of void and solid mass. The volume that traditionally defines a sculpture is described in Heizer’s works as absence rather than presence.

The simplified geometric forms of North, East, South, West suggest the underlying Euclidean lexicon of basic three-dimensional forms—box, cone, and wedge—essential for all sculpture, ancient and modern. The architectural scale and construction of Heizer’s work call forth comparisons to the megalithic monuments of ancient cultures—a comparison that is explicitly addressed in his Negative Megalith #5 (1998), a natural, menhir-like stone inscribed in a rectangular niche, installed in a neighboring gallery. The son of an anthropologist, Heizer acknowledges numerous ancient sources for some of his forms but sees the comparison as more apt in the realm of effect than of specific reference:

It is interesting to build a sculpture that attempts to create an atmosphere of awe. Small works are said to do this but it is not my experience. Immense, architecturally sized sculpture creates both the object and the atmosphere. Awe is a state of mind equivalent to religious experience, I think if people feel commitment they feel something has been transcended.

The sheer magnitude of North, East, South, West, along with its physical insertion into the floor, creates a sense of potential physical danger that dramatically charges the viewing experience. 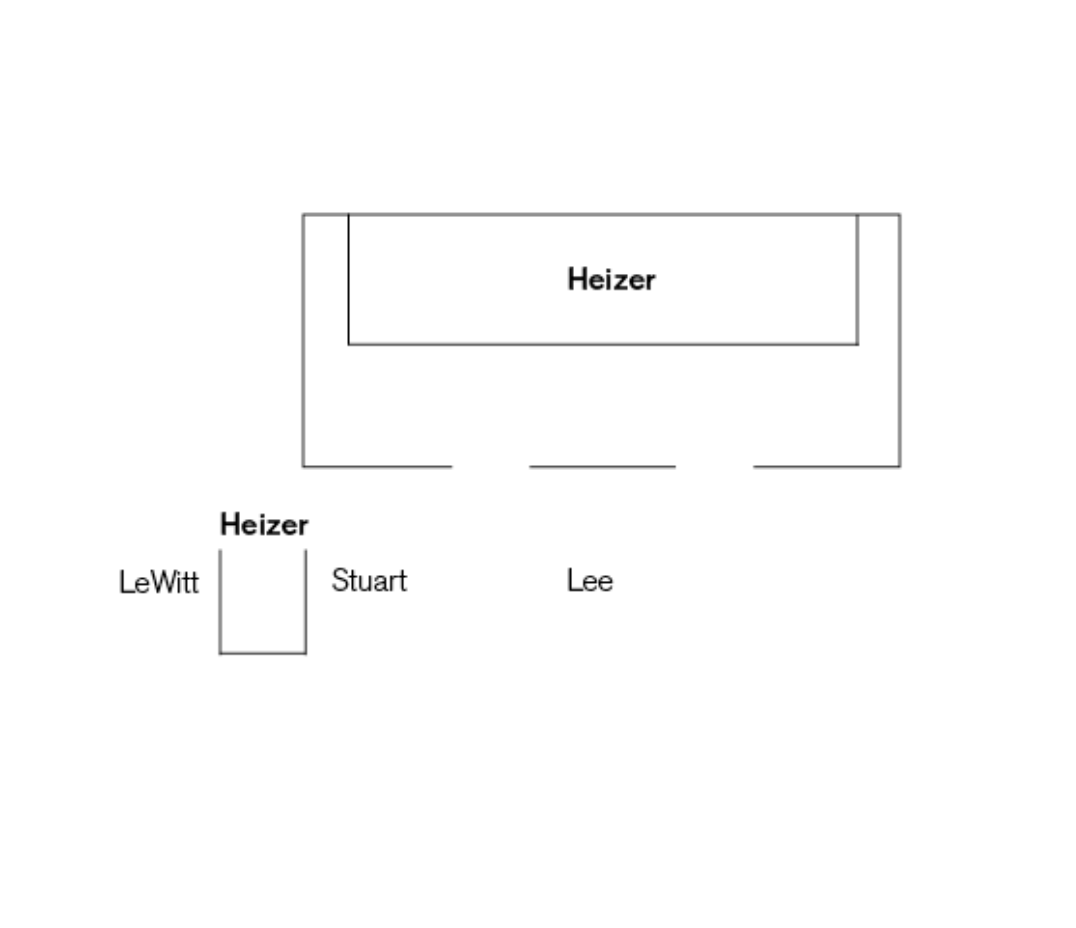 Michael Heizer was born in Berkeley, California, in 1944, son of anthropologist Robert Heizer. After briefly attending the San Francisco Art Institute in 1963–64, he moved to New York City in 1966. In 1967 Heizer began creating large Earthworks, primarily in California and Nevada. For his first one-person show, at the Galerie Heiner Friedrich, Munich, in 1969, he removed 1,000 tons of earth in a conical shape to create Munich Depression. He followed this with Double Negative, a displacement of over 240,000 tons of earth to make two vast incisions opposite one another on the edge of Virgin River mesa, Nevada. Heizer’s next one-person show was at the Dwan Gallery, New York, in 1970, and that same year he exhibited at the Venice Biennale. Major exhibitions of his work have been staged at institutions such as the Museum Folkwang, Essen (1979), and the Museum of Contemporary Art, Los Angeles (1984). Heizer lives in Nevada, where he continues to work on City, a sculptural complex begun in 1972.

A guided, 20-minute walk-through of Michael Heizer’s North, East, South, West (1967/2002) is given at 9:30 am before the museum opens on all days of operation. Please note that tours are limited to a maximum of 6 guests. Guests under 18 years of age are not allowed. Photography during the walk-through is not permitted.

Reservations are required to attend the walkthrough and to visit the museum.  Please call 845-231-0811 or e-mail heizer@diaart.org for further information and to make a reservation.

Michael Heizer was born in Berkeley, California, in 1944. He lives and works in Hiko, Nevada.