On Kawara was deeply concerned with the ways humans experience and record time. Kawara began his Today Series of paintings on January 4, 1966, and continued to work on them until his death in mid-2014. Adhering to a rigorous set of rules that he established, Kawara required that each painting be completed on the date depicted on its surface and in the language and grammar of the country in which it was completed. In addition to these formal conventions, the Today Series paintings are stored in handmade cardboard boxes along with a clipping from the local newspaper. Occasionally these boxes are exhibited, and particularly in earlier works, phrases or text from the clippings would form part of the title as well. Combining the individual with the universal, the Today Series is both a deeply personal journey (asserting that I was here on this day), but also the story of humanity and struggles experienced on a much larger scale—as captured through the lens of daily newspaper reportage.

The Today Series was presented at Dia Center for the Arts from January 1 through December 31, 1993; each calendar month saw a different rotation of Date Paintings, chosen exclusively from those made in New York City—a thousand works in total. Kawara’s One Million Years was also presented for the first time as an audio piece in that exhibition. Alternating between two voices, a female reader for even years and a male reader for odd years, One Million Years is an oral reading from Kawara’s twenty four-volume publication by the same title. Both artworks reflect the influences of the micro and macro in Kawara’s work, and how an individual lifespan forms a part of human history.

On Kawara was interested in time—its measurement in days, years, centuries, and eons. Each Date Painting in his Today series, the magnum opus that he began in 1966, is a monochrome field on which the date that the painting was executed is written according to the language and calendar of the country where Kawara was at the time. If he did not complete a painting by midnight, he destroyed it. Some days he made two paintings. Very occasionally, he made three. But most days he made one.

The paintings in the series conform to one of eight sizes, produced in a horizontal format, ranging from eight by ten to sixty-one by eighty-nine inches. For each work the artist mixed the paint afresh, so that the color of each is unique. Tonalities in the brown-gray and blue-black range dominate the paintings of his last decades. Four or five coats of acrylic are evenly applied to the canvas, creating a dense matte surface. Letters, numbers, and punctuation marks are then built up by hand, rather than with the aid of stencils. Initially he used an elongated Gill Sans typeface, later a quintessentially modernist Futura. Despite these variations, Kawara maintained that the letters and hues are of no symbolic significance, nor is the choice of a work’s color more connotative than its measurements.

Each painting is stored in a handmade cardboard box, most with a clipping from a newspaper published in the same city and on the same day that the painting was made. (Kawara has exhibited the works both with and without their boxes.) History as recorded in daily events, whether global or local, is bound together with a residue of individual activity. The subtle traces of manual execution are a counterpoint to the dialectic between order and chance—that is, between the regularity of calendrical and linguistic conventions and the arbitrary strictures of size and color. Kawara created Date Paintings in 137 cities worldwide, a project that ended only with his death.

Thirty-six Date Paintings are on view at Dia Beacon, one for each year from the beginning of the series until the millennium (including the exceptional Friday, November 3, 1989, when he completed a pair of works). Executed in the same small format and similar dark tonalities, they were made in locations from Tokyo to Stockholm, from New York to Nova Scotia. Their starting point is contemporary with some of the earliest works in Dia’s collection.

This installation contains an additional, unseen component: its air is purified by Japanese white charcoal installed at the artist’s request under the wood floor. This charcoal is known for absorbing chemicals, freshening air, removing humidity, and releasing it back into the air when the conditions are drier. While this material is traditionally used to ionize the air in Japanese houses, Kawara’s subtle gesture may or may not affect viewers in ways they consciously register. 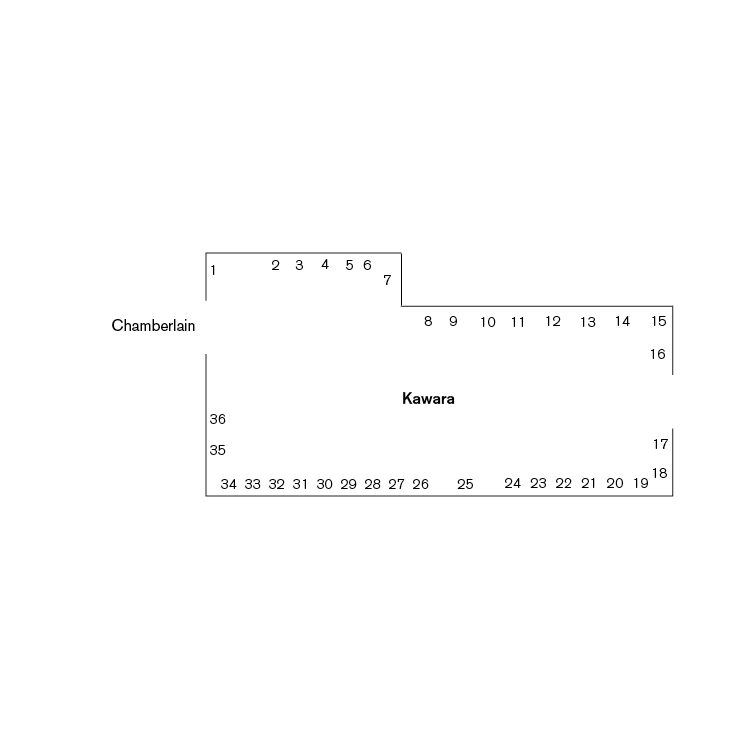 On Kawara (1932–2014) preferred to count his age in days instead of years. His lifespan numbered 29,771 days. Kawara’s earliest exhibitions include the first Nippon Exhibition at the Tokyo Metropolitan Art Museum in 1953, and at the Takemiya and Hibiya galleries the following year. In 1965 he settled in New York City, where he remained an intermittent resident for the rest of his life. His work was exhibited at New York’s Dwan Gallery in 1967, and his one-person exhibition One Million Years
was shown in Düsseldorf, Paris, and Milan in 1971. Kawara’s work was included in Documenta in 1972, 1982, and 2002 in Kassel, Germany, the 1970 Tokyo Biennale, and the 1976 Kyoto and Venice Biennales. He won the Carnegie Prize in 1991 and the Kunstpreis Aachen the following year. In 1993 Dia held the yearlong exhibition One Thousand Days One Million Years, for which Kawara installed paintings from the Today series that were produced in New York City. The exhibition also included a book work, One Million Years (Past), and a sound work, One Million Years (Future). Twenty years later, and in commemoration of Dia:Beacon’s tenth anniversary, Dia organized a live reading of Kawara’s One Million Years, and produced a new recording of the work which was released as a compact disc in spring 2014.

Artists on On Kawara