Dia Art Foundation presents an exhibition of Sam Gilliam’s early work from the 1960s and 1970s at Dia Beacon in Beacon, New York. Installed alongside Dia’s permanent collection, this presentation situates Gilliam’s practice in dialogue with that of his Minimal and Postminimal peers, such as Robert Morris and Anne Truitt, who, like Gilliam, considered painting in an expanded form. One of the most important figures in American abstract art he emerged from the Washington, DC, cultural scene in the 1960s alongside Truitt. Setting himself apart stylistically from Washington Color School painters, with whom he is often associated, the artist incorporated a beveled edge and experimented with suspension as two distinct methods of working with canvas.

The long-term display features one of Gilliam’s Beveled-Edge paintings, titled Spread (1973), a series that he began in 1967. Also exhibited are two of his Drape paintings, both titled Carousel II (1968), which are suspended in concert with one another to form Double Merge, a large-scale canvas installation hung from the ceiling. With the pioneering Drape paintings, Gilliam shifted his canvases from the frame and wall to three-dimensional space, imparting a sculptural quality to the installations and allowing them to become site-responsive. Unique to each space, the soft folds of canvas may not be draped the same way twice.

Since the early 1960s, Sam Gilliam has explored the ways in which painting can be interrogated and redefined, while maintaining certain formal constraints. His early interest in dispersing large fields of color across a canvas evolved into two seemingly divergent experimentations: on the one hand, he incorporated the use of beveled-edge stretcher frames, which add depth to the overall canvas; and on the other, he engaged large swaths of unprimed and unstretched canvas suspended from the ceiling, draped across ladders, sawhorses, and wooden planks, or attached loosely to the wall. While the former result is a dense, relief-like object placed on the wall, the latter is often very large, unstructured, and visually and physically encompassing. The artist used both methods to transition his two-dimensional paintings away from the flatness traditionally associated with the medium and toward three-dimensional space.

Gilliam’s Postminimal exploration of the tension between compositional order and disorder developed, in part, out of an early interest in Abstract Expressionism and, more specifically, Color Field painting. When he moved to Washington, DC, in 1962, the latter movement was the predominant style of the city’s painters—a core group of whom came to be known as the Washington Color School. Characterized by large or contained areas of color within a nonrepresentational composition, some of the artists associated with this school also stained or soaked their canvases, rather than employing the traditional method of using a brush to apply paint. Diluting acrylic pigments to stain the canvas in order to achieve allover tonal ranges, Gilliam quickly became affiliated with this group upon his arrival in the capital. The resulting compositions created with this staining technique resemble the fluid, diffuse look of watercolor on paper.

By 1967 the artist had turned his attention to rethinking the supporting structure of his canvases with the first of his Beveled-Edge paintings. Gilliam made Spread (1973) by adding a water-tension breaker to his paint to render it translucent once applied to the canvas. After pouring acrylic paint onto swathes of canvas, he then folded the material while the paint was still wet to elicit unpredictable effects, further intensified by the variance of color and areas of unprimed canvas. Once dry, Gilliam wrapped the canvas around beveled-edge stretchers, transforming the formerly two-dimensional painting into a relief that is angled away from the wall at 45 degrees (others in this body of work are angled toward the wall). Though the paintings in this series are hung against a vertical plane, they look as if they might be able to stand on their own like a sculptural object.

Gilliam’s first unstretched, loosely suspended canvases appeared one year after the Beveled-Edge paintings and were shown in 1969 at the former Corcoran Gallery of Art in Washington, DC. As if to answer the formal questions raised by the density of the near-sculptural Beveled-Edge works, the ten Drape paintings shown at the Corcoran appeared lightweight and easily maneuverable because they were hung from the gallery’s ceilings. Unstretched and unprimed, the canvases sway in response to movement, such as the flow of air stirred by passing viewers. Additionally, the soft folds of canvas may not be draped the same way twice and thus the works appear differently each time they are displayed in a new space. Like other Postminimal artists in Dia’s collection, who explored anti-formal properties in their work and privileged the process of making or assembling over final compositional form, Gilliam’s loose Drapes exhibit a situational flexibility that responds to the environment of their display. The two single Drapes shown here, both individually titled Carousel II (1968), have been suspended from the ceiling to form the unique installation Double Merge. This immersive, site-responsive installation recalls the artist’s room-sized, situational works of the late 1960s and early 1970s, in which unstretched painted canvases were arranged to span an existing space. Composed on-site, Double Merge responds to the industrial scale of Dia:Beacon’s high ceilings and large entryways, with canvases suspended from the ceiling’s beams, hovering above the floor. 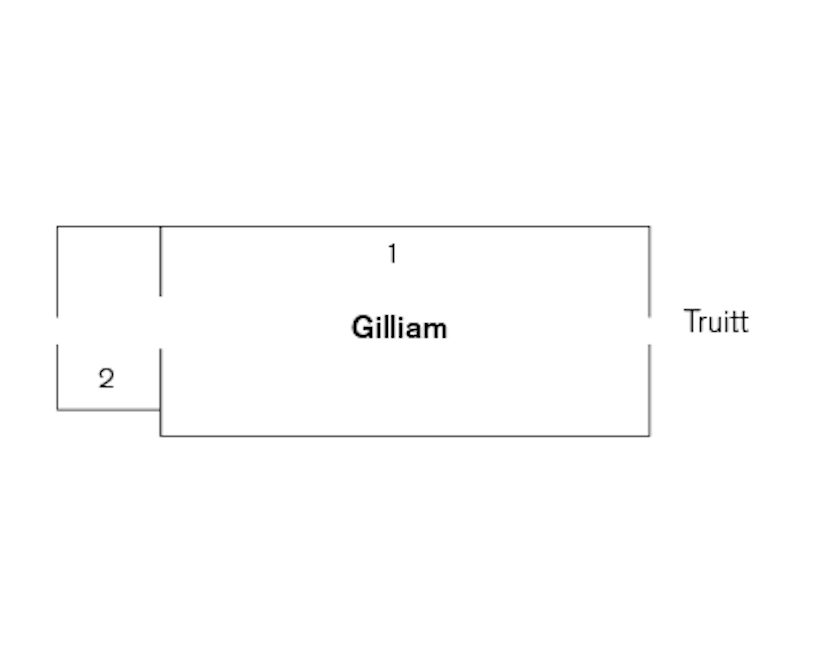 Sam Gilliam was born in Tupelo, Mississippi, in 1933. He grew up in Louisville, Kentucky, where he attended the University of Louisville and received a BA in 1955 and an MFA in 1961. After moving to Washington, DC, in 1962, he became involved with the Washington Color School. In the 1960s he developed two distinct methods of working with canvas by stretching it over a beveled-edge and by leaving it unstretched, suspended from the gallery wall or ceiling. Gilliam has been the subject of many exhibitions at venues including the Kunstmuseum Basel, Switzerland (2018); Corcoran Gallery of Art, Washington, DC (2005); J. B. Speed Memorial Museum, Louisville, Kentucky (1996); Studio Museum in Harlem, New York (1982); and Museum of Modern Art, New York (1971). He is the recipient of numerous grants and awards, including the United States State Department Medal of Arts (2015), National Endowment for the Arts Individual Grant (1989 and 1967), and John Simon Guggenheim Memorial Foundation Fellowship (1971). Gilliam lives and works in Washington, DC.

Sam Gilliam was born in Tupelo, Mississippi, in 1933. He lives and works in Washington, DC.