A pioneer of light-based art, Mary Corse is one of the few women associated with the Light and Space movement that originated in Southern California in the 1960s. Throughout her career Corse has experimented with different ways to physically imbue her paintings with light. Her techniques have included the use of electric light, ceramic tiles, and glass microspheres, with which she creates simple geometric configurations that give structure to the luminescent internal space of her paintings. This focused presentation of Corse’s painting examines her treatment of internal compositional space—using geometric form in juxtaposition with gestural brushwork—from the 1960s to the present. These works open themselves up to their environment, reflecting and refracting light, and invite a perceptual encounter that is grounded in both vision and movement.

Mary Corse is made possible by major support from the Ric and Suzanne Kayne Foundation. Additional support is provided by the Horace W. Goldsmith Foundation and the New York State Council on the Arts, a State agency.

Since the mid-1960s, Mary Corse has experimented with different ways to physically imbue her paintings with light. Her techniques have included the use of materials that project, reflect, and refract, such as electric light, glazed ceramic tiles, and retroreflective glass beads. These materials, which respond to their environmental conditions, are applied in simple configurations, using the logic of the grid as an organizing principle. Euclidean geometry structures the fluid, luminescent internal space of Corse’s paintings. Viewers are invited into a perceptual encounter that is grounded in both their vision and the movement of light across the composition’s surface.

Corse is often associated with the Light and Space artists of Southern California, a group known for using translucent industrial materials to explore the physical and perceptual qualities of light and space in the 1960s and 1970s. One of the first of these artists to incorporate electric light into her practice, she built a series of boxes using fluorescent and neon tubes between 1966 and 1968. Untitled (White Light Series) (1966) is one of the earliest examples of her work in this vein.

Unique among her peers, Corse took classes in quantum physics at the University of Southern California in order to build the electrical components for her work by herself. However, her studies into the inherent subjectivity of the physical universe encouraged her to return to a more gestural kind of mark making. In 1968 she began a series of large paintings using glass microspheres, a material used in highway signage because it glows when in direct contact with light. To make her ethereal White Light paintings, Corse built up canvases with layers of uninflected acrylic, sanding each layer between applications of paint. Once the surface density reached her desired level of saturation she sweepingly applied a final coat of the retroreflective beads.

The surfaces of these canvases oscillate with changes in lighting and the viewer’s position. Movement illuminates squares of diagonally applied paint within the sixteen-part grid of Untitled (Light Painting, Grid) (1970), one of several early paintings from the White Light series that explored the directionality of her brushwork in opposition to the geometry of the grid. Similarly, Untitled (White Light L-Corners, Beveled) (1969), Untitled (White Light, Beveled) (1970), and Untitled (White Light Square Corners, Beveled) (1970) each manipulate the grid formula through articulated corners that glow in contrast to the central interior space. Repeating the corner motifs at varied scales, Corse explores the body’s physical relationship to fields of structured light. In 1969 she began to bevel the edges of her paintings to privilege the work’s surface over its physicality. The resulting paintings appear to float on the wall.

In the mid-1970s Corse briefly turned from microsphere painting to experiments with other reflective materials. Untitled (Black Earth Series) (1978) is emblematic of her work from this period and consists of glazed ceramic tiles that were molded directly from a large flat rock found in Topanga Canyon, California. The rough and undulating surfaces of these tiles precisely map the topography of their source, while their gridded arrangement recalls the sixteen-part structure of Untitled (Light Painting, Grid). However, the dynamism of Corse’s White Light brushwork—which reflects her own movements across the canvas—is supplanted by the naturally undulating topology of rock within the Black Earth series. Following her experiments with fired earth clay, Corse returned to painting with Untitled (First Black Light Series).

Corse’s interest in the tension between geometry and light continues to evolve as illustrated in her recent Inner Band works. Paint is applied in broad sequential panels in Untitled (White Inner Band with White Sides, Beveled) (2010). This incident is not visible when the painting is perceived obliquely. As Corse explains: “Your perception, your subjectivity, your position, you are involved. It brings the viewer into the painting. The art’s not really on the wall, it’s in your perception.” 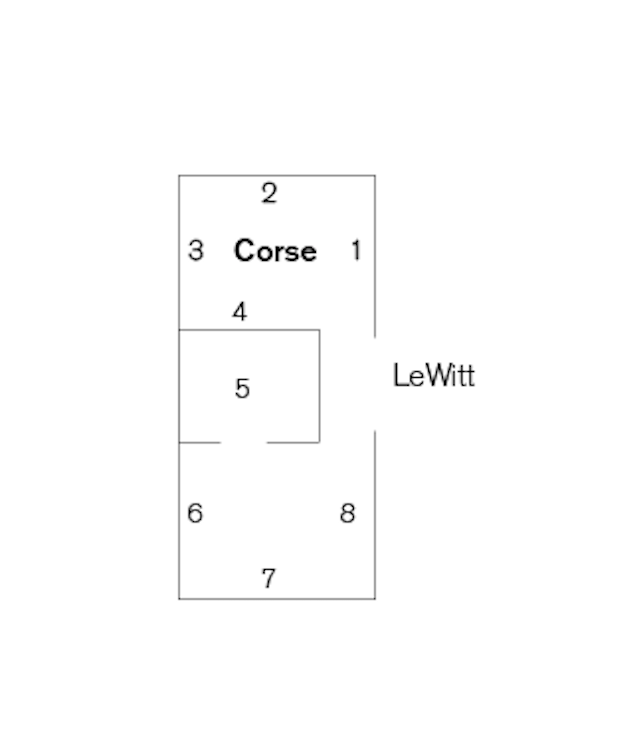 Mary Corse was born in Berkeley in 1945. She received an MFA from Chouinard Art Institute (now California Institute of the Arts) in 1968. While at Chouinard, she started experimenting with ways to infuse light into her paintings. In 1966 she moved from creating minimally shaped canvases to working with transparent Plexiglas and eventually engineering complex energy systems. In 1968 she began mixing tiny glass beads, like those used in highway signage, into acrylic paint, creating expansive canvases that shift depending on the viewer’s position and ambient light. Corse turned away from this work to experiment with other reflective materials in the mid-1970s, including acrylic squares, metal, and glazed ceramics, for which she built a custom updraft kiln at her studio in Topanga Canyon, California. She returned to using retroreflective paint in the late 1970s and continues to deploy this material on an increasingly large, mural-like scale. Corse is the recipient of numerous grants and awards, including the Cartier Foundation Award (1993), National Endowment for the Arts Fellowship (1975), Solomon R. Guggenheim Museum’s Theodoron Award (1971), and Los Angeles County Museum of Art’s New Talent Award (1967). Her work has been exhibited extensively in Europe and the United States. She is the subject of a comprehensive survey at the Whitney Museum of American Art in New York in 2018. Corse lives and works in Topanga Canyon.

Mary Corse was born in Berkeley in 1945. She lives and works in Los Angeles.