On view in these galleries is a representative display of Anne Truitt’s practice between the 1960s and 1980s. Truitt’s first mature works are simple sculptural abstractions that evoke the vernacular architecture of her childhood home in Easton, Maryland. Drawing on her memories of fences, many of her early works take the form of painted, vertical panels or large, upright structures. Placed on the floor and scaled to the viewer’s body, these works invoke the syntax and scale of Minimalism, although her allusive subject matter and intuitive use of hand-applied color set her apart from other Minimalist artists. While others eschewed the subjectivity of Abstract Expressionism, Truitt harnessed its legacy to explore the transcendent potential of geometric abstraction. As she explained, “I have struggled all my life to get maximum meaning in the simplest possible form.”

These galleries trace the evolution of Anne Truitt’s practice from her earliest experiments with Minimalist shape and repetition to her spatial deployment of form and color in both vertical and horizontal formats. Truitt’s first mature works are abstract shapes evoking the vernacular architecture and physical environment of her childhood home in Easton, Maryland. Drawing on her memory of fences, Truitt produced several sculptures in 1961 and 1962 with vertical panels numbering between one and seven including White: One (1962), a thin post resting on a simple base. This sculpture introduces the singular column as a recurring formal motif in the artist’s practice. Pith (1969) and Landfall (1970) are examples of Truitt’s later use of this vocabulary.

In a related body of work produced for her first solo exhibition at the André Emmerich Gallery in New York in 1963, Truitt presented large, upright structures painted in dark hues. Placed on the floor and scaled to the viewer’s body, they require a physically engaged perceptual experience. North (1963), a monumental work from this time, is an imposing wall-like sculpture that reflects Truitt’s interest in lateral expansion. About her early sculptures she would later say, “You strive upward on the vertical, and you’re held in place by the practicality and the intractable physicality of the horizontal.”

Her early involvements with seriality and monolithic form, evident in both White: One and North, anticipated the emerging permutational and spatial qualities of Minimalism. But her intuitive use of color and compositional techniques set her apart from artists like Robert Morris and Donald Judd, with whom she is often compared. While they eschewed the gestural drama of much Abstract Expressionist art, Truitt’s works revealed the transcendent potential of geometric abstraction. As she stated, “I have struggled all my life to get maximum meaning in the simplest possible form.” To this end—much like Agnes Martin’s precisely painted grids—Truitt’s work serves as a bridge, mediating between the two opposing aesthetic positions of New York Art School painting and Minimal art.

Throughout her career, Truitt explored the limits of perception through color and line. In North, the color shifts almost imperceptibly between shades of deep, rich green, causing the sculpture’s dense surface to oscillate according to the viewer’s position and the gallery’s lighting. These variations of intensity and tone are revealed through extended viewing. Almost indistinguishable variations of a single hue are similarly juxtaposed in Landfall. The work’s rectangular fields of seafoam blue wrap around the corners of the square column, interrupting the appearance of this otherwise solid and logical shape; viewers must carry the memory of each side as they move around the sculpture. Whereas Morris used gray paint to augment the gestalt effect of his plywood sculptures, Truitt used color precisely to undermine any formal totality. In these works, the uneven swaths of color set up a contrapuntal tension with the sculpture’s shape.

While Truitt’s sculptures are constrained by their concrete physicality, her paintings have a related yet distinct spatiotemporal quality. As she explained, “I regard them as inflections of sculpture.” Arundel XXXV (1976) consists of a white ground with dispersed graphite lines accented by thicker bands of white acrylic paint. This subtle yet expansive painting creates space by engaging the viewer’s peripheral vision as the eye scans their surface for incident. Truitt said, “A force is only visible in its effect, and it is the split second in which this effect becomes just barely visible that haunts me.”

The palette of Truitt’s 1970s work, dominated by colors traditionally gendered as feminine, can be seen as a provocative rejection of the austerity of Minimalism. In Grant (1974), lush mauves and peaches sweep around the profile of a rare supine sculpture. Signature (1974), an unusual columnar sculpture that is punctuated by a horizontal cross section at its top, is similarly wrapped in pastel pinks and peaches. And Echo (1973), her largest painting, similarly consists of an enveloping field of saturated pinks. Extending the horizontal orientation of her earlier North, the works Echo, Grant, and Toi (1981) draw viewers into still other somatic experiences of the artwork and the wall or floor on which it has been placed. 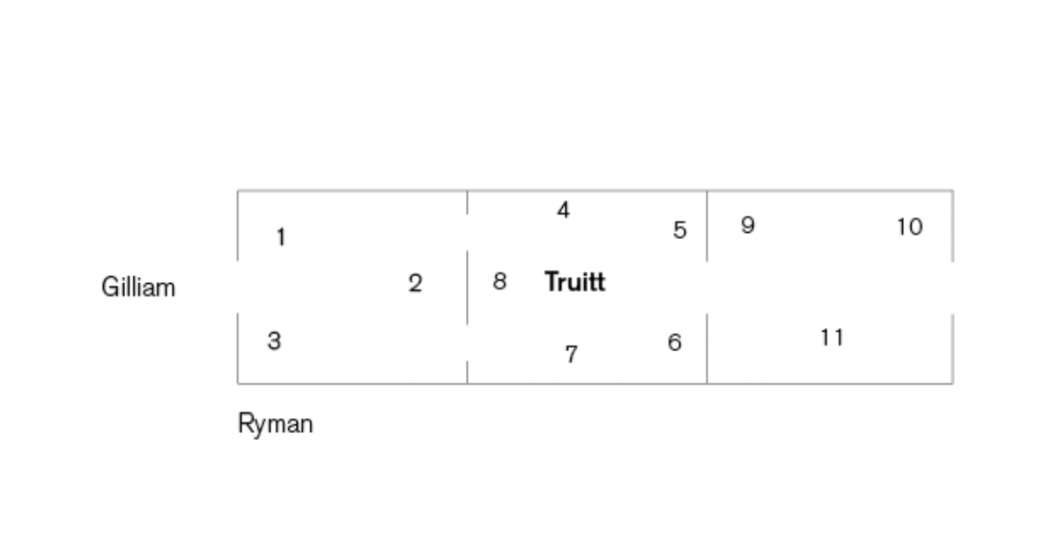 Anne Truitt was born in Baltimore in 1921. After receiving a BA in psychology from Bryn Mawr College in 1943, she worked as a nurse’s aide and psychiatric-ward assistant in Massachusetts. In 1949 she abandoned the fields of nursing and psychology to pursue art, studying sculpture at the Institute of Contemporary Art in Washington, DC, and the Dallas Museum of Fine Arts. Truitt had her first solo exhibition at the André Emmerich Gallery in New York City in 1963. After living in Japan from 1964 to 1967, she moved back to Washington with a renewed devotion to her signature columnar forms and lived there until her death in 2004. Truitt was the recipient of many awards, including a fellowship from the John Simon Guggenheim Memorial Foundation in 1970 and the Cather Medal from the University of Nebraska in 2003. She has been the subject of major exhibitions—including retrospectives at the Hirshhorn Museum and Sculpture Garden, Washington, DC, in 2009, and the Whitney Museum of American Art, New York, in 1973—and her work has been acquired by museums across the country.