A pioneer of the Mono-ha movement in Japan, Lee Ufan developed a sculptural practice in the 1960s that explored the tension between natural and man-made materials and the dialogue between object and space. In 1972 he changed the titles of the works that he had made up to that point to Relatum, referring to a concept in Heideggerian philosophy, which conveyed the artist’s interest in contingent circumstances. His use of “Relatum” can be compared to the frequent use of “untitled” by American Minimal artists.

The exhibition at Dia Beacon, resulting from close collaboration with the artist, showcases Dia’s 2017 acquisition of three sculptural works by Lee – Relatum (formerly System, 1969), Relatum (formerly Language, 1971), and Relatum (1974)—alongside several important loans. Relatum (formerly System, 1969), one of Lee’s earliest Mono-ha sculptures, is composed of six steel plates that are bent at ninety-degree angles and positioned evocatively in relationship to the gallery's architecture. Relatum (formerly Language, 1971) juxtaposes two diametrically opposite materials, pairing seven thick, soft cushions with large boulders. In Relatum (1974), a long wooden beam is suspended above a steel plate by a thick length of rope in a seemingly precarious arrangement that captures the interconnectedness of various materials; a defining principle of Mono-ha.

Lee Ufan is made possible by significant support from COS and the Samsung Foundation of Culture. Additional support is provided by the New York State Council on the Arts, a State agency, and the Sakana Foundation.

Through contingent arrangements of industrial and natural materials, Lee Ufan’s installations open up the possibility for encounters between objects, viewers, and their surrounding space, toward a heightened awareness of the world “as-it-is.” The ethics of mediation that play out in his art mirror his experience living between East Asia, Europe, and North America. In 1956 Lee moved from Southeastern Korea, where he was raised, to Tokyo, where he would study philosophy. Merging phenomenology, structuralism, and Eastern metaphysics, Lee developed a sustained critique of modernity in both his art and his writing by the mid-1960s. “Since it is called contemporary art,” the artist noted in 1969, “it should go beyond modern art. And it should achieve a contemporaneity that differs from modernity as it offers a new world.”

Lee absorbed the latest art and theory while in Tokyo, and recognized in Minimalism “a momentous change” from earlier art forms concerned with subjective representation. After a debut as a painter, in 1969 he turned to the international idiom of elemental sculpture. He began exhibiting with a group of Japanese artists associated with Mono-ha (School of Things), a movement for which he soon became an unofficial spokesperson. Formally similar to Postminimalism and Arte Povera in the West, Mono-ha artists juxtapose diverse materials in ways that emphasize their inherent properties and call attention to the fact that the spectator is yet another component in the world. Accordingly, rather than asserting or denying authorship over an object, Lee’s early works redistribute form across a system of material and physical
relations. Exemplary in this sense, Relatum (formerly Iron Field, 1969/2019) is a field of steel rods standing upright in a bed of sand. The grainy horizontal plane and metal vertical lines oscillate between whole form and entropic dispersal, making a totalizing sense of the work impossible.

The viewer is also decentered by visually confusing, temporary relations in Lee’s Relatum (formerly System, 1969), which consists of six steel plates bent at 90-degree angles and resting on the ground. Four plates are arranged in an open rectangular configuration parallel to the gallery wall. The two remaining plates function as odd doubles of the core structure that, by reaching toward the corners of the gallery, cause the rectangle to oscillate between integrity and openness. Through such paradoxical compositions, Lee noted, “the performer is at the same time performed upon.”

By the 1970s, such aesthetics of mutual recognition formed the core of Lee’s practice. In Relatum (formerly Language, 1971/2011), seven rocks of various sizes rest upon seven foam pillows, which are distributed across the gallery floor in studied randomness. Viewers, spared authorial direction, can take in all rocks at once or focus on one after another while they navigate through them. The encounter of the hard, natural element and the soft, synthetic material exposes their respective qualities, while the focused lighting embeds objects and viewers in their surrounding space. In so doing, Relatum proposes a novel relational model and reveals the disparity inherent in subject-object dualism—the foundation of modern Western thought. The artist theorized this cognizance as ethical, stating: “One-sided demand of gaze is by now tantamount to violence.”

In 1972 Lee changed all the titles of his extant three-dimensional works to Relatum. As he explained, “a work of art, rather than being a self-complete, independent entity, has a resonant relationship with the outside. It exists simultaneously together with the world that is and is not, i.e. a relatum.” In the mid-1970s he extended this notion of equilibrium further by integrating suspension into his works. As a result, the empty space around installations from this period appears all the more vividly. In Relatum (1974/2019), a long wooden beam hangs from a rope above a steel plate, itself supported by a group of pebbles on the floor. Relatum (1974/2011) similarly employs a delicately balanced steel rod on a small stone as a radius. The arc of the rod’s movement is traced in charcoal along the gallery wall. Collectively refuting a unilateral assignment of value, Lee’s installations hint at the possibility of the material world, unrepresented. 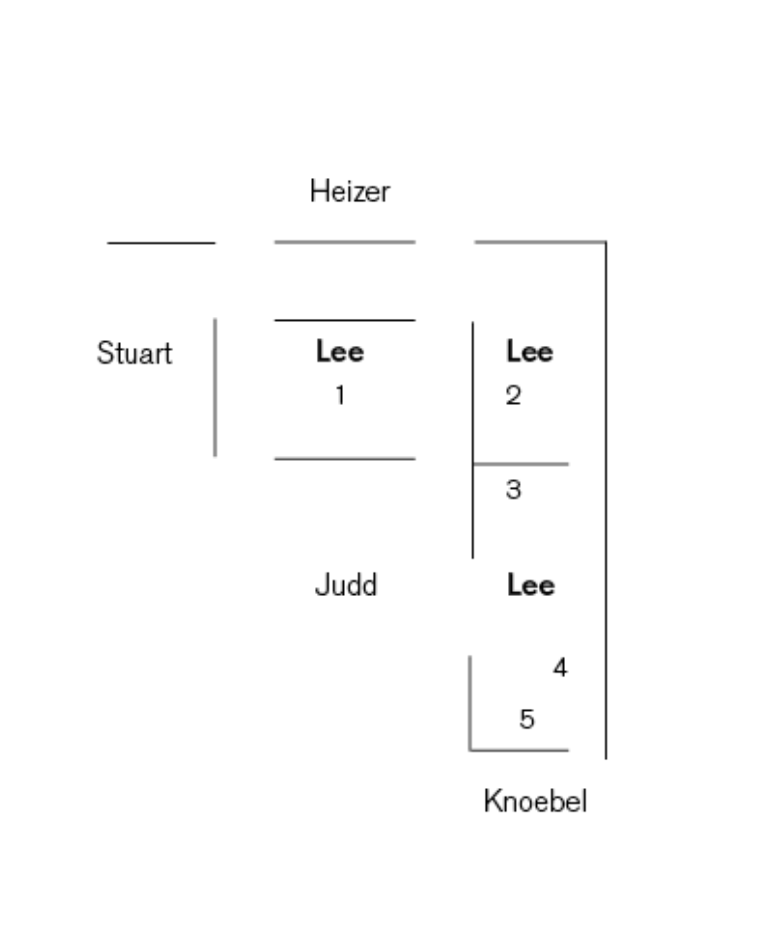 Lee Ufan was born in Gyeongsangnam-do, Korea, in 1936, while the country was under Japanese occupation. Following training in traditional inkbrush techniques at Seoul National University High School, in 1956 he moved to Tokyo, where he studied philosophy at Nihon University. In 1967 he had his first solo show at Sato Gallery, Tokyo, and in 1968 his work was included in Contemporary Korean Painting at Tokyo Museum of Modern Art. In 1969 Lee staged an ephemeral happening and made contingent structures for the 9th Contemporary Art Exhibition of Japan at Tokyo Metropolitan Museum of Art, which signaled a departure from his earlier optical, discrete paintings. This show brought together Japanese artists identified with Mono-ha (School of Things). Throughout the 1970s, the artist participated in several exhibitions that juxtaposed North American, East Asian, and European artists to highlight their shared concern with material, process, and site. A dedicated teacher and prolific cultural critic, Lee published seventeen books. In recent years, acclaim for his work has brought him exhibitions worldwide. In 2010 the Lee Ufan Museum, designed by Tadao Ando, opened in Naoshima, Japan. Increasingly distilled and monumental, the artist’s sculptures continue to juxtapose natural and industrial materials, in keeping with his relational philosophy. Lee lives and works in Kamakura, Japan, and Paris.

Lee Ufan was born in Kyongsang-namdo, Korea, in 1936. He lives and works in Kamakura, Japan, and Paris.